Before entropy sets in completely, let's get a bit of an update here.
I'm still churning out the same whiny shit in my notebooks, but I'll spare you that rubbish here. I set in to work today, thinking the whole thing through, and reckon I've made some progress on how to cut down on the wanking and just get on with my work a bit easier.
The job is good, yet I am managing to constantly fuck my hands up. Between peeling roasted pimentos, blanching kale and doing load after load of dishes, I find myself with withered, exfoliated hands on a daily basis, and a variety of cuts and pokes as well. I type this now with five band-aids covering various fingers. Either I'll grow thicker skin or learn to be more careful. I worry at the fact that many of these little holes I find in my skin appear inexplicably. I don't know how I got them; it's as if someone were sticking pins in a voodoo doll.
I am fascinated, when I come home to clean these wounds by pouring hydrogen peroxide over them, just how much of my hands light up white as the chemicals react to the bacteria. My skin bubbles and stings. Then the handsoap, the rinsing, the wrapping of transparent band-aids. The rest will attend to itself.
I don't know if anyone else has this, er, tendency, but lately I've felt inclined to adopt an English accent whenever I speak, and sometimes even incorporate English slang into my language as well. I admit that I've always been something of an Anglophile, but I think I'm going through some kind of phase as well these days. Maybe it's all the British television I've been watching. Spaced, for instance. Good lord, where have I been? I've just been loaned all four dvds of Black Adder as well, which I've never seen. Apparently I'm in for a treat. I'm enjoying The Smoking Room quite a bit. Not to mention this hilarious bit from Extras wherein Daniel Radcliffe finally escapes his Harry Potter trappings.
So it has seeped into my language a bit. I find myself wanting to greet everyone with an 'alright?' instead of a 'hi how are you?'
It makes more sense. Brief, to the point, and no answer is expected. Not to mention the fact that hi, how are you is, at least for me, a hollow exchange that I feel more or less obligated to spit out but hate all the same. I imagine other people are just as tired of it as I am. But I also imagine that I'd get many an odd look if I went round saying 'alright.'
Getting back to my point. If you were a fly on the wall while I happened to be talking myself through something serious (it's helpful, what do you want) you'd probably find me slipping into a bit of an accent. Even if I were alone. I feel like a bit of a wanker for doing so, but I also don't really like my own voice and feel ridiculous when I hear myself saying anything. So getting a bit in character is useful. And if it works, well, fair play to me. Alright?
That about covers things for now. I'll try to debut some proper fiction before too much longer, if I can successfully get past my ridiculous hangups and such. I'm writing this and that, and I've begun a new webcomic just for kicks. But I need more. I'm still holding back. Still looking for some magic key, some golden ticket.
It hardly needs mentioning that summer has finally turned its toes up, and fall has come at last. So in honor of that, here's some tunes for you.

And Bob's your uncle.

In Which Monkeys Are a Hit

Bookclub. Every other Thursday night, my friends and I gather to discuss a book over food and drinks. I didn't get around to reading it this week, due to my life being more hectic than usual. But I attended at their request, and sat with them listening and doing sketches and eating Pillsbury croissant rolls and drinking Papio. Everyone liked the Papio. We all got right drunk and there was even some inebriated dancing to Christopher Cross. Ye gods.
I drew a picture of my friend Tom, though really I think it looks more like Craig Thompson. 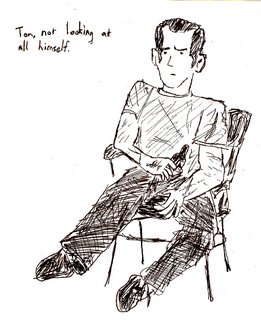 This morning, I am in my purple robe. Coffee.

Sunny With a Chance of Ditty Bops

This is late.
The past few days have been full and overwhelming. An emotional ride to say the least. My friends and I drove up I-84 through the Gorge - stunning - up into the Husum highlands for a wedding, camping out in the shadow of vineyards and mountains. Sleep was drunken and uncomfortable, but the ceremony was perfect. Beautiful. My need for ritual was satisfied.
The winds of change sweep in, shaking the trees. The birds all fly away. A new job, and everything has a sort of bittersweet air these days. Tainted. The last gasp of summer.
I was delighted to witness the charming stage show of the Ditty Bops last night at the Aladdin Theater. This morning, as I rode out towards Hawthorne to meet a friend for coffee and writing, I looked across and saw two very tired and disheveled looking women walking towards me. It was none other than Amanda and Abby themselves. I rode up to them and shook their hands, giddy; I thanked them for playing and made small talk, trying not to gush. They looked exhausted, so I let them be on their way... yet they were completely gracious. I'm always wary to stop a musician on the street, afraid to come off like some creepy fanboy. But they seemed pleased.
I rode on with a big grin on my face.
Our writing session was really more of a peoplewatching affair, as inevitably happens. I get out of the house to focus on my work; I go back home because I can't focus when there's so much to look at. One panini, iced coffee, and severe case of the jitters later, I was back at my desk. I wonder how I could have expected to get anything done out there.
Once home, I set about taking my procrastination to appropriately extreme levels; it's my prerogative as a writer to put off doing work for as long as possible, naturally. I alternate between episodes of The Mighty Boosh and glasses of Papio, and scurrying around my room listening to the beats of Simon Posford and tidying up obsessively. Anything to keep me from facing the blank word document. Let me check Neil's blog again. Let me inspect my new Moleskine cahiers. Again. More wine? Yes please. Nothing like drinking and electronica to fuel a cleaning session. Mood lighting and incense. I am on fire.
Cleaning becomes more frantic as it wears on. Less to do. I fancy my new calendar and listen to songs about the sea. I lay on my floor and drift away. Endless checkings of Adium and Ye Olde Gmail account.
The entire day has been mine. No work, no evening obligations. These are the days I dream about, not a care in the world, every moment offering itself to me like a sacrifice, begging. Live. Live.
I do love those Ditty Bops.

The Essex Green - (Don't Know Why) You Stay
Nick Cave & the Bad Seeds - Nobody's Baby Now
Summer at Shatter Creek - Something to Calm Me
A Silver Mt. Zion - Horses in the Sky
Christian Kiefer - Original

Tabatha Cottis, who are you?
Are you in need of wheels? Can I help you somehow?
I rode to Freddie's yesterday to deposit a paycheck, and discovered that the balance was somewhat lower than it should have been. Home to check the history. Sure enough, over the past five days, there were three checks which had been cashed out of my account, in amounts of $220, $300, and most recently, $600.
My memory is faulty, to be fair, but surely I would remember something like this.
I called it in. I had no idea that the bank had visual records of every check that they processed... but they pulled up the errant checks and, lo and behold, found that the signatures didn't match the ones on any of my other checks. Not by a long shot.
It seems I have been irresponsible in my disposing of old checks... perhaps I trashed some, and they were recovered. I'll never be sure. But there it was, in front of me:

How surreal to see your name written in someone else's handwriting! Who is this person?
After taking care of the necessary forms, signing affidavits and freezing the account and securing it all tightly, I headed off to the southeast precinct of the PDX police department and sat in one of the cushy leather couches of the waiting room. Finally a burly, gum-chewing officer came out and took my report, smacking away. I rode home in something of a daze. The money will be reimbursed, Tabatha will be investigated. And I will go on with my life, as before. Except I'll take a bit more care of keeping records of my checks from now on.
Which reminds me, I have a date with the fireplace to destroy all my current checks right now. Then off to Powell's.

Maybe I'd get more done if my desk weren't so messy. 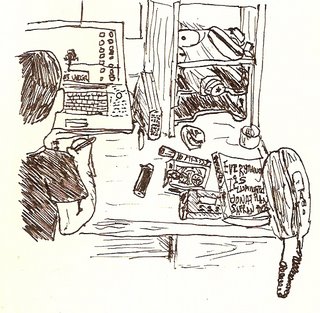 Claire and I in the Dark

12:01.
The first minute of the first of four, count 'em four days off.
Can I get a hallelujah?
Candles? Check. Pinot Noir? Check. Housemate out of town for a week, leaving me alone in the house? Check.
The shadows dance, candelight making my speakers look like monoliths on the wall. The wine is poured. The music will be played at a volume sure to disturb the neighbors.
Can I get an amen?
The next few days, I tell you, they will be grand. They will be well used.
But for now it is time to dance in the dark.

DJ, at your leisure.