My co-worker Nick Bucher (chef extraordinaire, Kool Keith enthusiast, and kind soul) was biking away from Noble Rot this past Friday night when he was struck by a car. They tell me he was thrown a great distance, and that he passed away the following morning at OHSU hospital.
This was a man I worked with three days a week, including my week-ending Saturday night downstairs shifts in the restaurant. I would slave over my dish pit while he worked his stuff in the microscopic kitchen to my right, and we would move in and out of one another's orbit, trading off bits of Thom Yorke songs or cheesy 80's pop fare (though I was not down with Mr. Big. Sorry Nick). He would pose random philosophical queries to me and I would return to my dirty water to think about them, returning with (hopefully) decent replies when I went to polish silverware. Is the expression 'god-awful' inherently blasphemous?
Well, that's a good question, chef...
Now there is this space where his body once moved, these things that we picked up and put down, and hovering over it all like a (screaming) banshee, the memories of my brief time knowing him. When I started at Noble Rot I felt shy, nervous, and quite certain that I didn't belong there, having no real culinary experience to speak of. I was thrown, for the first time, into the world of a professional kitchen, and the head chefs intimidated me. Between my fear of screwing up and general lack of common sense, I often had questions of protocol that went unvoiced when in their presence.
I would ask Nick instead.
He was the one who very graciously told me that it was best to hydrate butter lettuce in cold water, generally speaking. He was the one who I approached most often when I needed to know where some wayward pot, pan or straining implement lived.
It was some time later that I learned that Nick was 24, a good two years younger than myself. It shocked me at first to realize this; he was cool-headed, a remarkably professional chef, and a good bit taller than me as well. He exuded calm, discipline, and patience whenever I saw him. I always took him for, say, 27? At least? I always deferred to his presence as both an elder and generally wiser man.
Knowing now that he did indeed bear some of those traits that belong to the younger, less-mature types in our species (I've heard a humorous tale about his incredulously stubborn unwillingness to do dishes outside of the workplace), I can see that Nick was indeed flawed, was indeed young in many ways. I always felt that he presented a cool front, but that was fine by me - who among us doesn't do so, and with good reason? - but in the four months that I knew him I came to see him more as a real human being, rather than just the chef with the good hair and lots of obscure hip-hop on his iPod. In the last few weeks especially, I felt him opening up to me, and thought that it might, over time, become a more solid friendship. He'd even loaned me the final season of Home Movies so that I could verse myself in it in preparation for one of our Saturday-night banters.
I realize, as I have before when death has come to call, the importance of communicating our love to one another, valuing our time together, et cetera. The lessons you'd expect to learn from death. I've come to a point in my life where cynicism has a strong stake in my heart, and I wonder if we will, this time, remember these lessons. That we must be kind to one another. That we must live in a way that honors the memory of the one lost. And so on.
But what I take from it now, at least for myself, is this: our brother is dead. We must grieve for him and honor him. I know of few better ways to do this than to live in gratitude for having known him, and to remember the multitude of ways he touched (and in so doing, changed) my life.
I will watch the Home Movies dvd, and continue to quote them at the kitchen on Saturday nights. I'll strive for the same level of egolessness, of compassion, of calm that I witnessed in him. I'll sing his name with my instruments, as long as there is strength left in me to do so.
The Minbari believe that souls pass together from lifetime to lifetime. As such, they don't believe in saying goodbye, for no parting is final. Instead, they have a word: Nee'zhalen. It means good night. Literally it translates as be not alone in your travels.
So you will pardon me if I do not say goodbye.

Let me end this with a passage from The Sandman, in which the Lord of Dreams advises his son on the passing of his wife:

"You are mortal: it is the mortal way. You attend the funeral, you bid the dead farewell.
You grieve. Then you continue with your life.
And at times the fact of her absence will hit you like a blow to the chest, and you will weep. But this will happen less and less as time goes on.
She is dead.
You are alive.
So live." 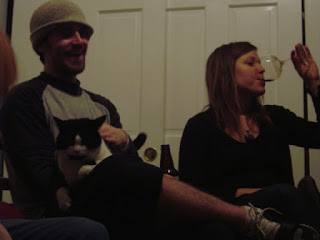