Busy little me. I've been drawing in my journal a lot, doing sketches, taking notes, having fun. Working a new job which I don't particularly like, but from which I'm learning a lot nonetheless. It's laid back and I get to draw at work. I recently got a nifty new printer/scanner, so I'll scan some pictures as soon as they're ready.

But in the meantime, here's some music for your listening pleasure. As promised. Enjoy... 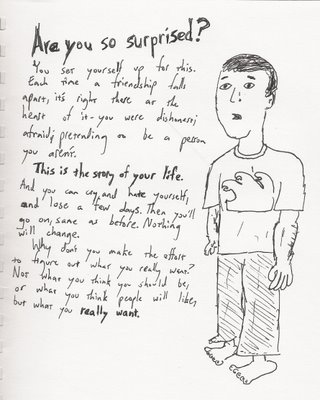 In Which There Are Decisions, Farewells, and Doughnuts

And so it is: there will be no fall mix this year. Nor, perhaps, a winter mix. Why? Because, as I've written before, my relationship with the mixes is not altogether healthy and lately has been causing me more undue stress than it has any right to. My obsession for collecting new, obscure music has pushed my iTunes library past the 15K mark. Its rapid weight gain has stretched its belt almost to bursting and it can scarcely get out of its chair most days.
And where am I in all this? Surely, I have lost my way. What good new music when none of it will be heard?
The eighteen-wheeler that is my downloading addiction comes screeching noisily to a grinding halt; the forces of inertia are strong and not easily overcome. The exhaust sputters and complains.
Understand that the sinister aspect of the mix lies in the pressure to perform, as it were. What once was fun and creative has become performance art, an act of frustration instead of joy. Bollocks.
So begins the era of processing the massive amounts of 'new' music.
However.
Do you really think I'd just disappear without keeping you informed of what I learn and discover? Perish the thought.
The mixes may be on a hiatus of indeterminate length, but in its place I will continue to post, perhaps weekly, songs that I have fallen in love with, as they come. It is my hope that they might turn you on to new and interesting artists, as I always wanted my mixes to do. But where they put emphasis on construction and design, this venture is unburdened by such formalities. I will listen to my music. And I will pass along what I find to you, good people.

Tonight I and hundreds of others said goodbye to one of my favorite bands, Sleater-Kinney, in their final show at the Crystal Ballroom. I've seen them twice before, but never have they played so ferociously as tonight. Imagine it, knowing that this will be the last time you play this song, hit this note, sing this line. They gave everything they had, and none of us were left standing by the end. It was emotional, to say the least. As their special guest-opener said, I feel truly grateful that, though I may not have been alive to see the Beatles play, or the Who with Keith Moon, I have lived to see Sleater-Kinney live on stage. And so I honor them.
And I say farewell.
And thanks.

The night ends with a ride down Burnside, dodging taxis and potholes, to Voodoo Doughnut, where I finally achieve my longtime goal of having a doughnut with bacon on it.
Wow. Now I can die happy.