My Kingdom for a Punchline

As any of you who've been keeping up with the Bu know, I'm still jumping around stylistically, and am enjoying the variety so far. However, I've been feeling increasingly frustrated with the process of writing the comics themselves. There have been times when I came up with a good punchline and the thing just wrote itself, but the more common situation is that of me sitting at my desk drinking coffee as I labor for hours trying to craft something funny. I'd never considered how difficult this can be to do on a regular basis. I've analyzed the formulas employed by a couple of my favorites, done the bulk of my comics so far in imitation of one of them or another, and yet I keep coming back to that old truism: make the kind of comic you'd want to read.
So I take it apart over and over again and try to establish just what this means to me. Sitting at the bar at Noble Rot tonight, I finally confronted the fact that I don't really like telling jokes in my comic. The idea of trying to structure a comic to get the most laughs seems dishonest and misguided. Already I've had several times when I felt crippled by the pressure to write something that would appeal to others, which is a backwards approach to the whole creative act in my opinion. So much of humor, to me, is bound in the context of specific situations, and the observation of true things. For my money, a sharp observational insight trumps a comedian's zinger ten times over.
Another thing I mean to avoid is humor based on outright mockery. I am critical of a good many things, but it doesn't feel right to use the comic as a platform to cast my judgments about, at least in such a direct manner. First, because I'm trying to stop being so self-centered all the time (I'm embarrassed by how many of the strips so far have been based on real-life events, for various reasons), and second, because while it's tempting to want to make fun of other people and their mysterious ways, it isn't all that funny.
Who knew writing humor was such a complicated business?
By the by, do any of you know of a decent comic layout program that I can get for free? I'm thinking about experimenting with a strictly photo/clip-art based style (maybe even creating a second webcomic devoted solely to it) which will let me indulge my more verbose side, but all the programs I've seen so far are awful..

Three by Three All Day!

I'm a little late with this (y'know, with the whole Bu thing takin' up the majority of my time), but I assure you I did in fact draw all these on the Third (okay, the last one was begun around 11:15 and finished around 12:30, but hey, I had to wait for Pat Benatar for finishing inspiration). At any rate, I'm sorry for the delay.
Here are my contributions for this month's 3-on-the-3rd: 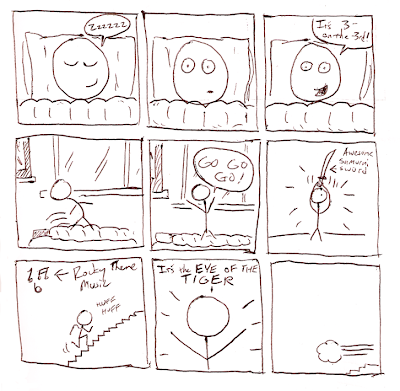 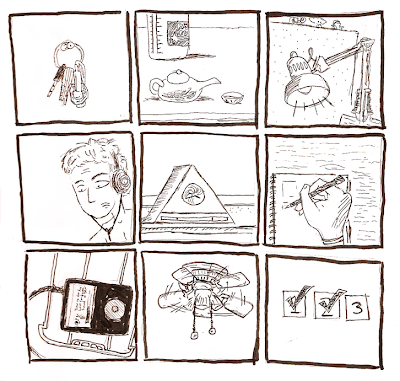 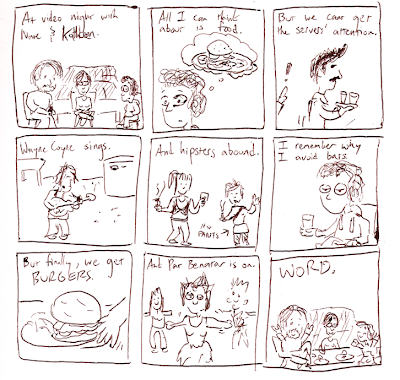 Also, in case you didn't know, Lindsey and Sanguinity have made a whole entire website dedicated to this comic adventure. You should totally check it out.