Peeking Out from the Trenches

So it's taken me a bit longer to get around to this than I intended (which seems to be the case with everything in my life these days), but I have been wanting to write a proper blog in which I check in about the whole comic process thing, how it feels so far, and whatever else. Sorry to be so single-minded, but it really has been consuming my existence lately.
I have now had more than one person get back to me saying they like my 'style,' as it has been thus far. I get a bit nervous hearing this, as I've been trying to push myself a little bit with each one, and try a different format each time. There've been multiple occasions where I was just too behind schedule and had to fall back on something familiar, but in general I've tried to avoid this. Don't get me wrong; I'm glad people are enjoying not only the comic's content but the art as well. It's just that I'm at a point where I want to move beyond my current style, which in my opinion is very limited, albeit pretty cute. I'm not trying to abandon cuteness here; it's more that I'm getting sick of myself. I should remind myself that even Craig Thompson gets sick of himself and his 'style' all the time (I heard it from his mouth), and take some consolation. It's not that I dislike the way I've been drawing, but that it feels lazy. I can do it without much effort, and it's not really helping me improve.
That said, I know that there has been some progress. I know that it takes time to really develop any skill. It's just hard when you see other artists (published or otherwise) produce things that, to them, may seem tedious, but seem quite beautiful to me. And then I look back at my own sketchbook, and my hand keeps drawing like itself. Sigh.
My road right now is still that of slow imitation, learning from the artists I admire (though I think I may implode with guilt if I rip off xkcd one more time). Sometimes the whole stick figure thing bothers me because it feels like an artistic cop-out, other times I find it really expressive and fun to play with. Also, as Scott McCloud has pointed out, there are many good reasons to employ stick figures instead of more specific characters from time to time.
I just don't want to get complacent.
On a different note, I am very much wanting to improve the general layout of the site. What I'm looking for is the single-comic main page look, with a side panel where I can say a few words about each strip, much like Jeph Jacques does with Questionable Content. I've found it really insightful to go back into his old strips and read about his progress from doing it twice a week, to three times, to making it a full-time job. Right now I can only dream about doing that myself, but it's nice to read about it.
So I want to throw it out there and see if any of you fine readers are html-savvy enough to help me design this sort of website, or know someone who knows how... I've registered a proper domain for the comic, but am holding off on choosing a webhost until I have a lead on how to make it look the way I want it to. It's probably very simple, but I don't know where to start.
With that said, I must tear myself away from this computer and get back to drawing. I'm in for the long haul; I have to practice some more.

Three on the Third, the 3rd

Hello! Just a quick posting... yesterday was a busy day for comics, getting the biweekly strip of the Bu up as well as doing these little cartoons. I've got to run out the door for coffee now, but I'll write more about all this drawing soon. Happy Three on the Third! 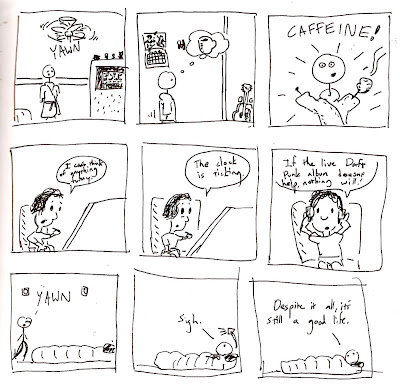