New Skin for the Old Ceremony

I am told it takes 21 days to form a habit. Something about training your body, tests confirm, etc. After a little bit of Googling, I will take the word of the friend who told me about this over any of those sites I found. The theory is intriguing either way.
My past attempts at discipline were generally short-lived, perhaps why none of them took. I flare up with the initial burst of determination, and then a few days later it's all gone to shit again. I really have nothing to lose. As the saying goes, how old are you going to be if you don't give this little theory a trial run? Yeah yeah. I know.
Inertia is still alive and well. Many moments of the past weeks have been lingering in my mind, calling out "Blog me! Blog me!" S sent me a wonderful cartoon a few weeks back that illustrated this perfectly. I'll link to it when I can find it. Something about Living to Blog. Ah yes, here it is: 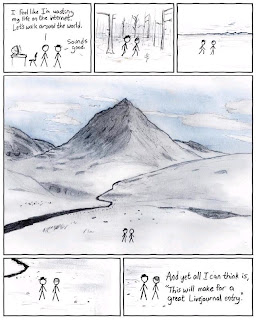 It's frightening. It seems near impossible to avoid the urge, near impossible to counter. I could revolt and swear off my computer entirely, as the characters do. Throw myself into the world, and L-I-V-E, as Maude would say. But how long would it take to shake the urge to simply record my life for later documentation? How long before I stopped thinking, this would make a fantastic blog? 21 days?
I do try, more and more, to remove myself from the technological world. Playing LPs rather than plugging in the iPod. Putting the computer away when I'm not using it. Lighting candles. And so on. But it does nothing to loosen the grip the technological world has over me. What can I do when even my best effort becomes impure in its heart? But I digress.
It is a beautiful spring day. It is also Free Comic Book Day, for those of you who don't have to be off to work in a few hours. Maybe you'll find the newest episode of Fables, a clever and imaginative update of all the old stories. Who knew Goldilocks was such a bitch?
The chives on my windowsill are a good inch or so out of the soil. Being the first things I've really ever grown in my home, I'm quite fond of them. Their presence makes a huge difference to the feel of the place, and is one more strike against that black hole of amorphous electronic oblivion I feel myself ever falling into.
And now, armed only with my trusty Field Notes memo book and a copy of The Elements of Style, I dive back into the trenches. Godspeed!